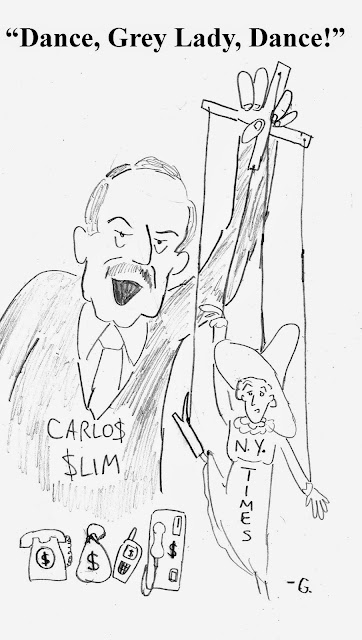 This cartoon depicts Mexican monopolist Carlos Slim. who is the second largest owner of the New York Times since he helped to rescue it from bankruptcy. It is widely believed that he is in large part responsible for the Times' bias in favor of mass immigration, as he profits mightily off of Mexicans going to the U.S. Note: I used the spelling "Grey" because it looks classier that way. Cartoon also found at DeviantArt. That is all.
Posted by Glaivester at 10:06 AM

Glaivester: Nice job. You draw a lot of disparate issues together (though I imagine you are getting it from Sailer). Maybe one about the whole two-headed thing where the Democrats want the votes and the Republicans want the cheap labor? I've always felt that's one of the biggest problems here.

Baloo: If you at all care, it's 'no puedo ver el dibujo'.