Here is the regulation propoal. You can comment through May 19, 2021:

What Some GOP Senators have said against it.

Here is a sample comment (in bold) if you want to object to Biden's attempt to encourage Critical Race Theory in schools through grants:

Regarding Federal Register Regulation 2021-08068, Proposed Priorities: American History and Civics Education, I am very concerned about the implications of Proposed Priority 1, which regards incorporating “diversity.”

These sorts of proposals usually involve trying to use the lens of contemporary racial politics as the primary way to understand every historical issue. The general goal of most “diversity” education is the denigration of western culture, the demonizing of people of European heritage, and the discouragement of a sense of pride and loyalty to the United States as a historical entity. Rather than developing a sense of patriotism and national unity, they serve to encourage resentment and division in some students, and a sense of shame and guilt in others.

First of all, the lauding of the 1619 Project as an example of the kind of scholarship that we should strive to emulate is concerning. In addition to making many factually suspect claims, the 1619 Project which seems intent on overemphasizing one aspect of our country as the central fact of our country, effectively using our history to push a partisan, sectarian agenda under the guise of fairness.

Quoting Ibram X. Kendi is also a red flag, as he has explicitly called for racial discrimination against those whom he sees as “privileged” as the way to combat racism. The idea that racist policies are “the cause of racial inequities” rather than “one cause” is of great concern, because it suggests that no inquiry into other causes will be allowed. Kendi does not seem interested in looking holistically into race relations, but only in looking at ideas that reinforce the view that white bigotry is the only cause of racial inequities and therefore any attempt to correct them must focus on punishing whites.

My concerns regarding the five sub-priorities (a-e) of priority 1:
(a) The term systemic biases tends to imply that only certain biases will be examined and corrected for. I am concerned that the real effect here will be to denigrate the perspectives of whites and to exalt only the perspectives of minorities rather than trying to find the truth in between.
(b) “Incorporating diverse perspectives” is fine if the idea is to get all sides of an issue, or that one’s race, ethnicity, etc. should not be a barrier on analyzing an issue. However, I am concerned that the goal here is going to be to try to find a racial angle on every topic discussed, which can distract from teaching the topic at hand.
(c) Again, I am concerned that this is just about injecting modern identity politics into every issue instead of looking at the issues as they existed at the time.
(d) I am concerned here that the goal of validating and reflecting “the diversity, identities, and experiences of all students” in practice means distorting history to appeal to students.
(e) Again, I am concerned that “identity-safe” learning environments means environments where students in “protected” groups are never challenged and students in non-protected groups are derided.
As for Proposed Priority 2, I agree in principle with teaching students to examine their biases and to be aware of misinformation. However, I am concerned that any program to deal with this must look at the biases of those who created the program, and make certain that it does not only teach students to identify bias on one side, or that the program creates a narrative and only looks for misinformation if it contradicts the narrative.

We need to examine our biases when looking for bias, and any program promoting “informational literacy” needs to tell students to question the program itself.

That is all.
Posted by Glaivester at 10:40 PM No comments:

Prayers for the Spiritual Battle

It is the last day to comment on the new rule: Procedures for Asylum and Bars to Asylum Eligibility. Comments close at 11:59AM EST. Sample comment: I support the proposed regulation. People who request asylum are guests in our country and they ought to appreciate what we have given them. People who flagrantly violate our laws and endanger U.S. citizens have no right to claim entry into our country. While I feel sorry for people who face persecution in their homeland, if they wish for us to protect them they need to respect our laws and avoid putting our citizens at risk. Moreover, people who have previous immigration offenses are unlikely to be making the claim of asylum genuinely and are simply looking to loophole their way into the United States. Anything else is allowing the safety and well-being of foreigners to be prioritized over that of Americans. That is all.
Posted by Glaivester at 10:22 AM 8 comments:

Today is the last day to comment to support President Trump's efforts to alter federal rules to discourage false asylum claims for the purpose of gaining employment: Proposed Rule: Asylum Application, Interview, and Employment Authorization for Applicants Here is my comment (in bold): I support this proposed rule. If the vast majority of asylum claims were genuine, or were processed in a timely manner, this would be unnecessary. But given the large number of fraudulent or frivolous asylum claims, and the inability of our overloaded system to handle them all, reducing the incentives to file fraudulent or frivolous claims is a very wise policy. The current system is likely to result in a large number of people who are employed who suddenly lose their employment authorization due to their claims being denied. This creates a very strong incentive to overlook their legal status and ignore the fact that they have either filed a claim that does not meet the qualifications for asylum, or even that is downright fraudulent. This is particularly true because our antidiscrimination laws are such that employers will have to hire them despite the conditional and temporary nature of their work authorization. In effect, the current asylum system is likely to create a large mass of illegal aliens whose employment produces a difficult situation for them and for their employers, and therefore create pressure for a mass amnesty and for the further erosion of our immigration laws. This proposed rule is essential in order to retain the rule of law in our immigration system. That is all.
Posted by Glaivester at 5:57 PM 3 comments:

There is a new rule proposed by the Trump administration that would make it easier for agricultural employers to replace Americans with H-2A foreign workers. Please go to this regulation on the regulations.gov site and make a comment telling Trump to nix the law and govern by the principles on which he ran. Note: comments must be submitted by 11:59 pm on Tuesday September 24 Eastern Standard Time. After this, the commenting period closes. The proposed rule is posted with the link. An explanation of why this rule would be bad (for those of you who do not have time to read and interpret multi-hundred-page regulations) is found here (yes, it's a liberal site, but I tend to think that unions and labor leaders are probably in the right on this particular issue). Here is what I posted, feel free to post this, with perhaps a few changes so you don't look like some sort of bot (also, giving contact information will likely make it more clear that you are a person posting this): I am opposed to the Proposed Rule “Temporary Agricultural Employment of H-2A Nonimmigrants in the United States” (Federal Register 2019-15307). This rule would work directly against the immigration principles on which this administration ran. In addition, with labor force participation for the past six years never once reaching the levels it was at between September 1978 and August 2013, any labor shortage clearly implies that businesses are not doing enough to coax Americans to take jobs rather than there not being enough Americans to take them. It would make it more difficult for domestic farm workers to take a job held by a guestworker, by reducing the period for such from halfway through the job to 30 days into the job. This would tend to belie the claim that we need H-2A visas because of a shortage of American workers, if we are making it harder for American workers to claim the jobs. Allowing employers to use one H-2A application for multiple seasonal jobs starting at different times of years would make it easier to avoid recruiting domestic workers. In addition, the ability to string together a series of unrelated jobs and the ability to make major changes in job terms also discourages domestic workers from applying. Allowing employers to avoid paying for long-distance transportation costs by shifting the cost to workers would allow employers to reduce the cost of hiring foreign workers, not only creating hardships for foreign workers, but further reducing the costs to employers of hiring foreign labor over domestic, which will incentive businesses not to hire Americans. Allowing businesses to self-inspect the quality of the housing given to migrant workers is an invitation to abuse. The new methods of calculating prevailing wages would likely result in reduced wages. This again would provide incentives for businesses to keep wages low and to claim that no American will take a job when in reality the businesses are just not offering adequate pay. If anything, the wages that businesses should be required to pay under the H-2A program should be raised significantly, so that businesses cannot use foreign labor as a tool to keep wages low. Expanding the categories of employees who are included in the H-2A program to include reforestation and pine straw employees would increase the competition that American workers face for jobs. In addition, it would take more workers out of the protection of the Migrant and Seasonal Agricultural Worker Protection Act, making it easier for employers to mistreat or cheat them, and again providing another incentive to hire foreign workers over domestic ones. If this administration intends to live up to the pledges on which it was elected, it should withdraw this planned regulation and instead offer regulations that would require employers who wish to use H-2A visas to pay higher wages and to be more heavily regulated, and to use whatever means are possible within the law to protect all workers from exploitation. That is all.
Posted by Glaivester at 8:54 PM 2 comments:

Some prayers for North Korea: 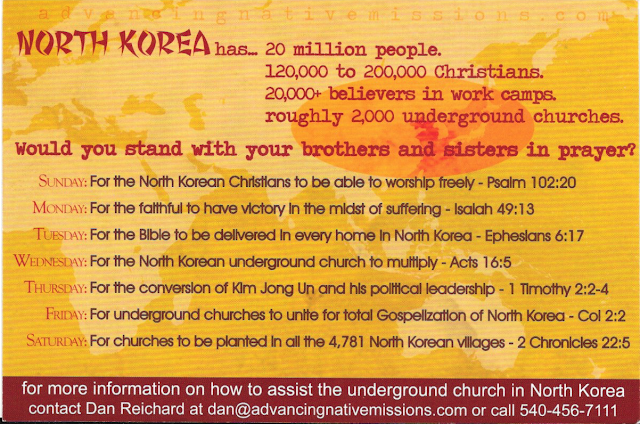 A New Cartoon for Thanksgiving

A different take on the "the white men were illegal aliens" idea: 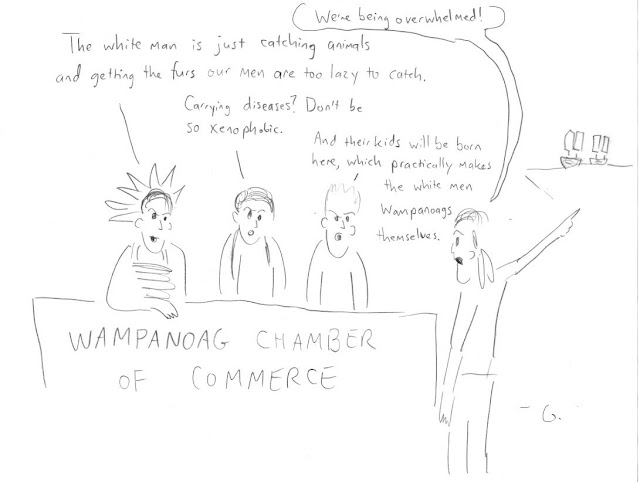 Full size here. That is all.
Posted by Glaivester at 5:03 PM 1 comment: