It seems to me that the major goal of trans activism is not that people are so terribly concerned about something that affects a vanishingly small percentage of people. Rather, it is about forcing hoi polloi to submit to whatever the elites want to shove down our throats next.

It is very much like the scene in 1984 where O'Brien forces Winston to lie about how many fingers he is holding up. So here is my cartoon on the subject. Note, there is full-frontal male... er... "female" nudity in the cartoon, because there is no way to make this point without it, but it is only in the form of a copy of Leonardo da Vinci's "Vitruvian Man..." er... "Vitruvian Woman," so it ought to be okay.

Given how nice Ex-Army and Baloo have been about putting my cartoons on their blog, I feel I should reciprocate by plugging Baloo's cartoon blogs: (1) Atlantea the Beautiful - focuses on Obama and his depredations against America in an allegorical way. (2) Baloo's cartoon blog - mostly single-panel gag cartoons. That is all.
Posted by Glaivester at 9:57 PM No comments:

Before I post this cartoon, let me say that I believe in a literal Hell. In fact, there are at least two literal Hells, the one where the unsaved go when they die (Sheol), and the one where they are cast at the Last Judgment (Gehenna). I also think that it is most likely that the Charlie Hebdo cartoonists and the people who killed them are literally in the first one right now (I hope that they believed on Jesus and were saved in the last moment, but it seems unlikely). So don't think that I take Hell lightly. But I believe that it is a reality to be acknowledged. Denying its reality will not save people. Acknowledging it at least provides the hope that people will seek a way to avoid it, and hopefully find the True Way, Jesus Christ. Also understand that I am a Baptist who believes very strongly in the saved/unsaved paradigm. Although those who go to Hell do go there for their sins, avoiding sin is not what allows you to avoid going to Hell (because no one avoids sin perfectly, and "the best you can do" is not good enough). Moreover, once saved by Grace (by believing in Jesus - that is, acknowledging that Jesus Christ is God the Son, Who died to pay for your sins, and trusting in Him to save you through His death) no amount of sin will send you to Hell - although sin has other eternal consequences (loss of possible rewards in Heaven, missed opportunities to share the saving Gospel with others). So I am not trying to imply that the specific wrongs I criticize were somehow the deciding factors in why I am portraying these people in Hell. Nor am I happy to see them there. Nonetheless, I believe one takes one's sin with him into Hell, so it is an appropriate place to confront them with their sins. So here is my latest cartoon on the Charlie Hebdo massacre: 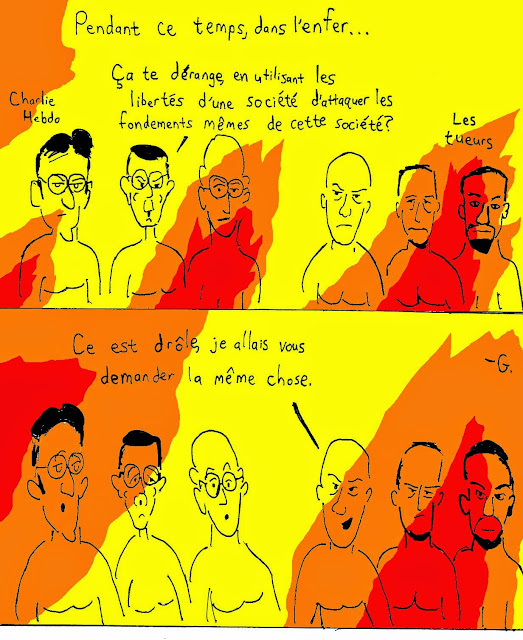 Translation was done using Google Translate with a little proofreading, so pardonez-moi if there are errors: First panel: Top caption reads "Meanwhile, in Hell," "Charlie Hebdo" is portrayed on the left, specifically (left to right) Bernard "Tignous" Verlhac, Stephane "Charb" Charbonnier, and Georges Wolinski (Jean "Cabu" Cabut and Phillipe Honore, also killed in the attack, are left out, as are the non-cartoonists). "The killers," are on the right, specifically (left to right) Chérif Kouachi, Saïd Kouachi and Amedy Coulibaly. Charb ask one of the killers (presumably Cherif, in any case he is asking the question in the singular) "Does it bother you, using the freedoms of a society to destroy the foundations of the same society?" Second panel: Cherif answers back, "That's funny, I was going to ask you the same thing." Please if any of my readers know French, let me know how good the translation was. That is all.
Posted by Glaivester at 10:40 PM 3 comments:

I Am Charles Martel

Below the break is my commentary on the Charlie Hebdo affair.  Given that we are supposed to show our courage by being willing to display offensive cartoons, I have decided to post the following cartoon, which is offensive to both Muslims and to those who are mourning Stephane Charbonnier.

You have been warned.

Boehner Gives the Base a Salute

This is how I see John Boehner: 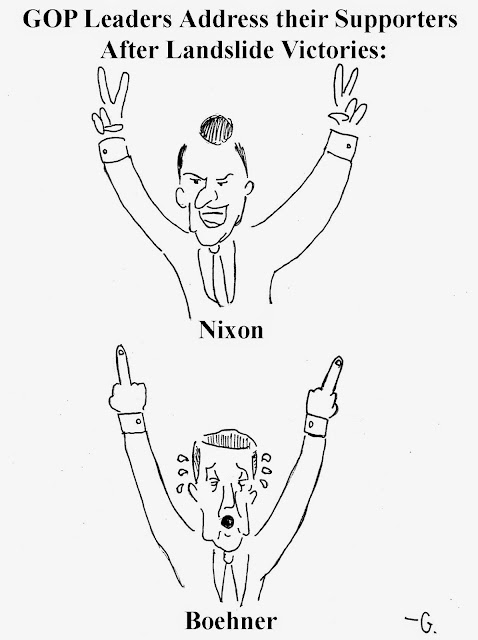 If you have a Republican Congressman, please call him and tell him to vote for Gohmert for Speaker: Congressional contact information That is all.
Posted by Glaivester at 12:31 AM No comments: