I Am Charles Martel

Below the break is my commentary on the Charlie Hebdo affair.  Given that we are supposed to show our courage by being willing to display offensive cartoons, I have decided to post the following cartoon, which is offensive to both Muslims and to those who are mourning Stephane Charbonnier.

You have been warned. 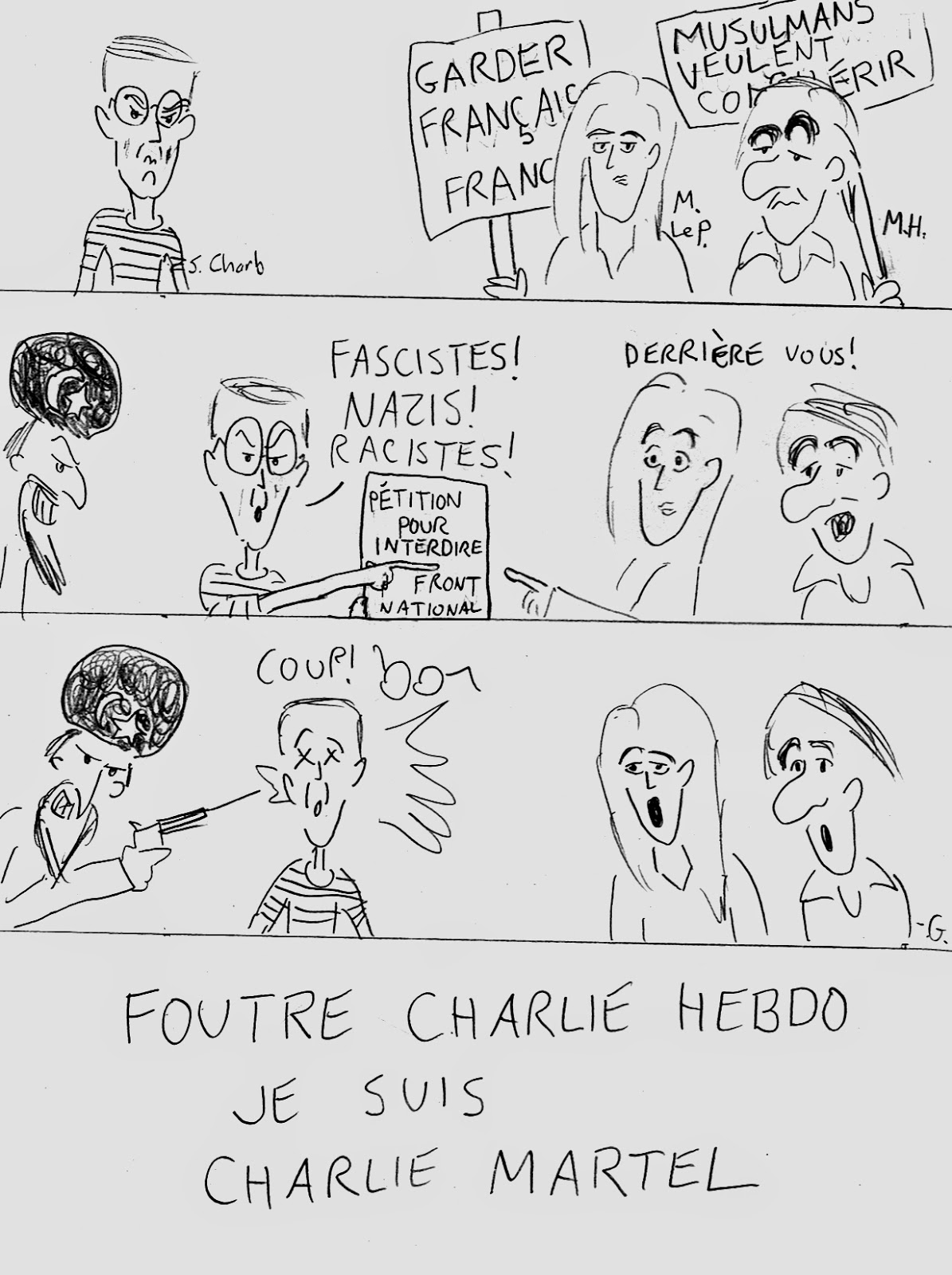 Update:Here is a cleaner version (cleaner artistically, and cleaner in language): 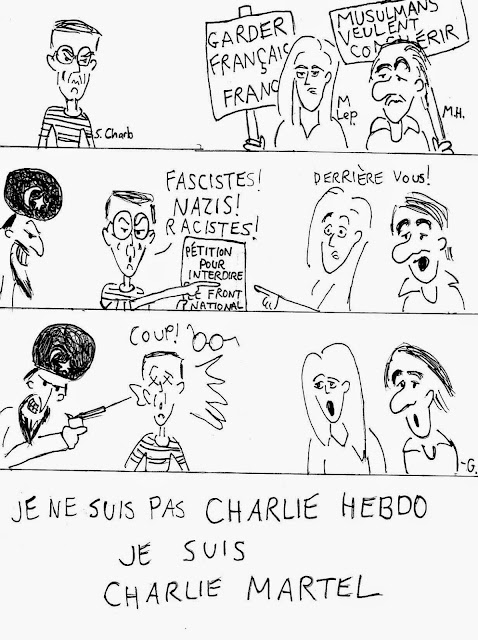 I'm from Iran, and supposedly a "muslim" but I support Charlie Hebdo right to publish whatever they want without having some assholes shooting killing them over some stupid cartoon.

Hey, Fucker you will answer me you piece of shit?

I will answer you. You belong in Iran, not a Western nation. The sooner you return , the better off the West will be.

Lol, I am in Iran. What now, bitch? You have anymore "arguments" in store?

I repeat, I sympathize SOLELY with the cartoonists in all of this, not with you fuckers, not with the islamists.

A million fuck on you Glaivester, for dishonoring these cartoonists!!!!

Yawn, that the best you got? Stay in Iran. We do not need any mohammedmen in the West.

I will worry about the Iranian Army when they get a navy and air force.


If you don't like Charles Martel, how about Jan III Sobieski? Tours and Vienna were mild compared to what is coming.

I'm not a mohammedan, I am an atheist secularist. You are making too many assumptions about me, you fucking neanderthal piece of dog-shit.

Hey Chris Mallory, I fucked and came in your mom's ass. She was sexy white bitch with nice freckled ass. I sucked her toes too.

To all you Muslims out there!

Sorry for not answering you. I don't get a lot of comments on my cartoons and had not checked my email yet today.

The point of the cartoon is that the leftists of institutions such as Charlie Hebdo spend their time attacking those who warned them of the dangers of mass non-European immigration.

I'm not saying that Charb deserved to get shot over publishing offensive cartoons, I am saying that he supported the policies that let large numbers of people into France who would shoot him over a cartoon.

I can support Charlie Hebdo in principle in terms of supporting freedom of speech while still acknowledging that they were wretched SOBs.

btw Kamran, I have no problem with Iranians, blacks, Asians, etc.

However, I do not think we should be importing large numbers of them into Western countries, any more than it would be a wise idea for Iran to allow 50 million Chinese to settle there.

You would be letting an alien people exercise control over you.

Brilliant! You have echoed my thoughts marvellously, if anything you have understated them. Serious congratulations.There are few reports in the media about Charb et al's attempts to stifle freedom of expression in regard to the Front National. Double Standards on a massive scale - Hebdo is being lauded in the general media as the last bastion of courageous free speech, spirit of Voltaire etc.
You have pointed to the elephant in the room.

Prepare to be thoroughly misunderstood and subjected to intense vitriol. Unfortunately your attempts to illustrate Hypocrisy in all her sublime essence will be interpreted by some as callousness toward the deceased.
Well, ce la vie . . .

And of course the Muslim pience of shit Kamran shows his true colors in the comments.

I have something for you, brown untermensch.
.|.

Go fuck your goat, it is all you subhuman non-white muslim pieces of trash are good about.

"If you don't like Charles Martel, how about Jan III Sobieski? Tours and Vienna were mild compared to what is coming."

Oh cute, he is threatening me.

You are a coward that is a clear example of "talk is cheap".

Do you honestly think I wouldn't send you for Jesus to sort you out if you threatened me IRL?

Anonymous moron, why do you think you are an example of anything different than 'talk is cheap'?

Stupid muslim cunts, your inbreeding has lead to mental degradation so severe you cannot even recognize that you accuse someone of something and practice it in the same post

LISTEN HERE. FUCKING DUMBASS. I AM NOT MUSLIM. IM A SECULAR ATHEIST. I DON'T BELIEVE IN GOD. YOU ARE NOT CHARLES MARTEL. YOU ARE A FAT NECKBEARD WHO LIVES IN HIS MOM'S BASEMENT AND WHOSE MOM SUCKS HIS PENCILDICK TO AT LEAST STIMULATE HIS LIFE A LITTLE BIT.

GOATS? I FUCK YOUR MOM. WHY DO I NEED GOATS? I FUCKED YOUR DADS MOM TOO. THE GOAT WAS BETTER TRUST ME. IM A HUGE HAIRY IRANIAN BASTARD, FUCKING EVERYBODY'S MOM. HUGE DICK HUGE GOLD CHAIN, COLOGNE ON MY MEMBRANE.

Apparently, apart from being a zoophile you are also a mentally unstable cunt. Is there a non-white Muslim/atheist piece of shit who is not out of order? Probably not.

Back to fucking the goats.

Also:
Say what you like about Muslims but those long beards really tickle your balls when they're sucking your cock... and that's just the women!

Hey fat neckbeard, your mom let on your computer again?

Get back in the basement you cunt!!

My skype name is: Kamran Maharramov

That's my real name. I don't really hate you. I'm just trolling. Sorry if I hurt your feelings man. Get in touch!

Seeing all those teary-eyed conservative looking women holding up "je suis Charlie" placards tells me that they really have never seen, or understood, the actual intent of many of Charlie's classy cartoons.

If there were an Academy award for the promotion of misogyny and xenophobia - and intolerance of others' point of view - Charlie would justly take pride of place at the top of the Podium. I wonder if someone like Angela Merkel would really march to the barricades for someone who - in the name of freedom of expression - would publish a cartoon of her mother with her bum poking up in the air, replete with target on the anus, or her father copulating with a pig's severed head. This is what the much-lauded "Charlie" has done with the founder of Islam - Blessed be His Name.

Of course, as an atheist, I regard all religions as a form of mental disease responsible for most of the mass murder in this world. But I think I can share one point of view with even the most radical of Muslims -
Charlie is offensive.
I hope it is not trite of me to say that I don't support the killings.

Why do you let people post rank obscenities in your comments? I find them most disconcerting.

If Kamran cannot express himself civilly I would ban him at our blog.

BTW, I am not objecting to your cartoon or Kamran's opinion, just his language.

I am considering linking to your post. Very original and provocative.

Kamran here, I was just trolling. I was angry and needed to get it out of my system. Thanks for that.

I have linked to your post from Blazing Cat Fur. You should a few hits from it.

You may not get any comments since they are used to the much more convenient Disqus system.

Burn down every single fucking Halal store in Europe with everyone in it. Exterminate them all.

A good cartoon. I agree. Leftists who decry how damaging Islam is won't recognize the danger until it's too late. Islam is coming after the gays and women first. Muslims will treat blacks badly too.

Everybody, except a few that said'I am charlie' are a bunch of hypocrytes, because they don't care about their freedom. Everybody knows muslims are killing, raping, murdering, stealing and destroying for over 1400 years and killed more than 300 million people and the war is still going on, trying to conquer the world as they tell everybody every day agai, but people don't want to listen.
Islam is poisened with nazisme but nobody want to hear that.

Shalom from the Netherlands.

Will you make an English language version?